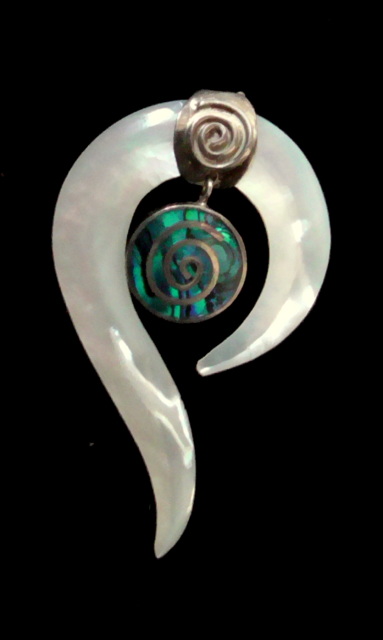 SKU: 707
$50.00
$50.00
Unavailable
per item
Hei Matau 707 --unpside down fishhook  necklace
2" 1/4 x 1" 1/4 in
Mother of pearl, pewter, paua shell
Hei Matau is taonga (a cultural treasure). It represents not only our land, but also prosperity, fertility and safe passage over water. They also denote the importance of fishing to Māori, and their relationship to Tangaroa god of the sea. Hei Matau represent strength, good luck and safe travel across water.

The fish-hook shape of the hei matau finds its origins in Māori legend, which holds that the North Island of New Zealand was once a huge fish that was caught by the great mariner Maui using only a woven line and a hook made from the jawbone of his grandmother. The Māori name for the North island, Te Ika a Maui ("The fish of Maui") reflects this legend.

It is believed that a carving -- taonga -- which is worn with respect or given and received with love, takes on part of the spirit of those who wear or handle it. In this way it becomes a spiritual link between people spanning time and distance. A carving that has been worn by family or tribal members over many generations contains the spirit of all of those people and is truly a great and powerful treasure.   When bone carvings are worn on the skin, the pendant changes color as oil is absorbed.

Pāua shells are recognized taonga, or treasure, esteemed both as kaimoana --seafood and as a valued resource for traditional and contemporary arts and crafts. Pāua are frequently used to represent the eyes in Māori carvings and traditionally are associated with the stars or whetū, the symbolic eyes of ancestors that gaze down from the night sky.
Add to Cart
Powered by